Claudia Naidu and I went to visit Anganathi and Mrs Xiphu at their home in Kuyasa, Khayelitsha, Cape Town in June 2014. You will see from the photographs that children in their street and Anganathi’s uncle came out to meet us and asked to be photographed and as promised I have included the photos. Mrs Xiphu said that Anganathi was so well that they were planning to visit their family in the Eastern Cape for two weeks. When asked she said, “I’m feeling very happy, I’m happy really. He’s changing, as he is no longer sick, and there are a lot of differences, healthy, he’s playing, yes”.
Claudia asked her, ”So in what way do you feel he was sick before?”
Mrs Xiphu replied, “Before, if he was sick, he changed, turned bluish and when he was playing hard, he became tired…Now no longer, he can run away, he’s no longer tired now. He’s playing right, nicely”. Evidently, Anganathi goes for check-ups every three to six months at Red Cross Hospital. But from the time of his operation she said, “He changed, he changes, he changed ya”. Anganathi agreed.

Anganathi is a charming little 5 year old boy, who was diagnosed with a heart condition when he 4 months old.

He was recruited into the study in February 2011. His condition caused his heart to beat very fast, he would tire very easily and would turn blue in colour.

Anganathi had his surgery in June 2012, and spent quite some time in hospital while recovering.

A couple of months after surgery, Anganathi was looking healthier than ever, and his mum was happy to report that he was doing very well, loves playing outside with his friends, and no longer tires as easily. 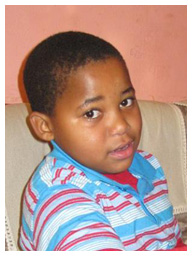 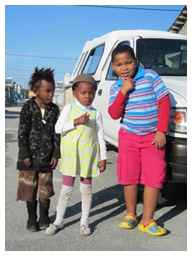