Hannah’s story of her ongoing recovery tells of a little girl whose heart has compassionately affected her Elsies River family and neighbours because life since her heart surgery has seen many challenges. Mrs Abrahams told us that although Hannah continues to get stronger she has had to be hospitalised a number of times in 2013 and twice before June in 2014. Two weeks before we met, she had been in hospital for bronchitis. Mrs Abrahams said that she watches Hannah for signs that she may be sick if she sees any she takes her into hospital immediately. She said, “If she’s working hard, breathing fast, then I take her in”. On all these occasions when Hannah was desperately ill Mrs Abrahams had nothing but praise for the hospital service. “I was treated like family,” she said, “doctors, cleaners, everybody there, if you show respect then they give it to you and they’re always supportive and kind, comforting you, talking to you”. For Hannah, Red Cross Hospital is her mother says, “her second address”. Whilst we talked, friends cuddled Hannah leading her mother to say that family and neighbours are always there for them because “everybody loves her and everybody can”.

Little Hannah was only 7 months old when she was recruited into the study. Diagnosed with holes in her heart when her mother was only 11 weeks pregnant, the doctors believed that Hannah would not live for more than a day, if that. Hannah was recruited into the study in February 2012 and had her surgery in June 2012. She spent just under three weeks in hospital, most of which was in the Intensive Care Unit. Hannah made a tremendous recovery and celebrated her first birthday at home with all her family, friends and neighbours in July 2011 - a very happy and blessed occasion for all. She is developing well and is getting bigger and stronger by the day. 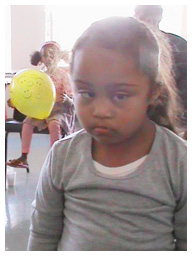 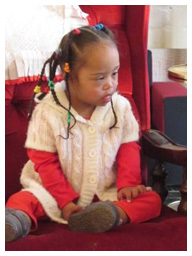