Sokwakha is now nearly 4 years old (in 2015) and has a little sister. Mrs. Xokashe told me that they travel to the Eastern Cape to see family and when they do so know that they can take Sokwakha into All Saints Hospital in Nyobo or the hospital in Umtata. It is important for us to know that Mrs. Xokashe has made these plans and that this region maintains facilities that can care for vulnerable or sick children.

Mrs. Xokashe had an interesting story to tell about Sokwakha’s recovery after her operation. Sokwakha, she told us was better and doing well especially as she no longer needed to take any medication. She said that the best part of her surgery was her stay in the children’s Intensive Care Unit. Evidently, Sokwakha was the only child in that part of the unit and stayed there for only two days. During that time, the doctors and nurses were always there for them and they remarked on how very strong her daughter was during her operation. What was important was that since then because she was well her father, Lucas Xokashe had been able to go to their home in the Eastern Cape and hold amaXhosa naming ceremonies for Sokwakha asking for their ancestors’ protection of her. Mrs Xokashe said that she was happy that these happened.

Sokwakha is another little baby girl recruited into the study. She was five months old when she joined the study in March 2012. The family had found out that Sokwakha had holes in her heart just a month earlier and the news was still a shock to them.

Sokwakha had her surgery in June 2012 and has since made a speedy and full recovery. She is now doing extremely well and growing healthily. 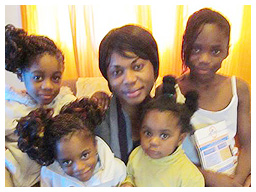